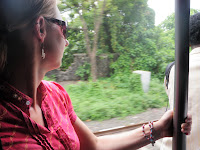 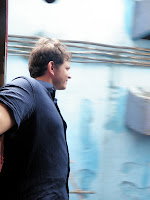 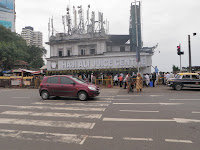 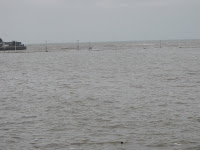 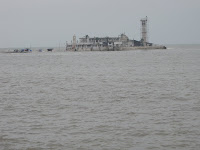 Success!! I finally got myself out of Bandra and into South Mumbai...via train! Ysiad met me and we walked to the Bandra Train station, maybe a ten minute walk because we had to cross the busy SV Rd. (I'm getting much better at just going for it when crossing roads). We walked to the tracks, looking around and trying to figure out how to purchase tickets. We were pointed to the right place and decided to get two second class tickets for 4Rs each (45 Rs equals $1). At the window, on the floor in each line, was someone begging for loose rupees. I enjoyed seeing what Indians did and it's pretty much what people would do in the US. Either brush them away, ignore, and occasionally give out a rupee. We noticed there were a couple "fast" check-in machines, so we asked how to get the "smart card" that works with the machines. "Line 3." We headed to line three and it ended up being 100rs with 73rs on the card. So we both purchased one to use for the ride back and I guess we both decided we would be riding the train again. People were very friendly and helpful and directed us to the "slow" train because the "fast" train skipped the station we were headed to. We hopped aboard the crowded, but not over crowded train. (We found out rush hour times and avoided riding then). I was the only female on the train and being white and blond, of course stuck out like a sore thumb. I had eyes boring into me. I also noticed a hand creeping towards my chest. Men suck every where!!! I can guarantee you that women rarely think about groping some strange guy and do it. At the next stop, I grabbed a seat where I could keep men away from my body. I thought to myself, "maybe all the women are in first class?" Ysiad told me that there were some all women cars and I made a mental note to find those next time. Now, the best "seat" in the house is standing at the doors. Well, there are no doors, it's more about hanging out where you get a nice breeze. On our trip back, the train was much less full and we grabbed those prime spots, as the pictures show. Yeehaw!

Our destination was Haji Ali's Mosque, which is located in the bay. During high tide, the walkway to the mosque is covered with water and pretty much impassable until the tide goes down. We didn't know when high tide was, but decided to test our luck. Well, high tide is close to 1:30pm, when we arrived. So, we grabbed a bite to eat at Haji Ali's Juice shop. We sampled a variety of smoothies and sandwiches. Most were very tasty and I think this is definitely a stop on the Mumbai tour for all of those who visit. Along, of course, with a visit to the mosque at low tide. After our lunch, we headed to Mumbai Central train station, accompanied by a teenage boy, who followed us the whole way and pointed us in the right direction at one point. At first I was wondering why he was following us, but he seemed harmless. I also had my XXL umbrella, which could take out anyone if need be. No groping on the way back, though I still need to figure out the all women cars if I take the train alone. We gave each other a high five as we are now train goers!!! And nothing beats the price of getting downtown, free of traffic, like the train.
Posted by Greg and Twyla at 4:25 AM