Greg's Birthday - where has the week gone?! 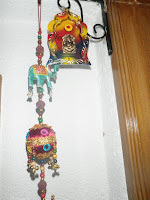 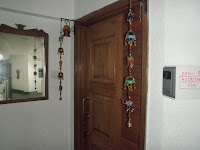 It's almost Friday! This week has gone by fast. I'll recapture some of the highlights.

First, my brother is now married. It's official and Elvis was there as witness. Two weeks ago, Ryan sent me an email saying they were starting to feel stressed (and when you live in Hawaii, stress just isn't tolerated) with planning a wedding, so they were heading to Vegas in two weeks to get married. At first I thought he was kidding, but no, it was happening. Luckily, the chapel where they were going to get hitched had a live, streaming video that I could access via the World Wide Web. Sunday morning, I got up at 6:00am only to realize I had calculated wrong and could still get another hours of sleep, so I went back to bed. At 7:00am, I got up, got the website up and felt a little confused. I didn't recognize anyone in the room. I switched to the lobby and it was empty. Greg encouraged me to wait for the wedding to start, so I used my patience and waited. This crazy rock music came on, the doors opened, and a voluptuous, black woman came through the doors. Mmmmmm, no, that's definitely not Jen. I was bummed. "Turn to the lobby again," Greg said. I argued I just looked there, but finally clicked the tab. Low and behold, there were my parents chatting. I called and got to watch them talking to me on the web cam. The wedding itself was all "Vegas, baby," complete with Elvis preforming several songs and getting Jen and my brother to dance to Viva Las Vegas. The ceremony was traditional and kept to a very respectable length. Jen looked great and fought back tears the entire time, while both mothers were crying the entire way through. I was later told that Jen had some awesome neon pink heels on too. Congrats to the newlyweds!

The next highlight of the week was finding Butterfly, an AMAZING cupcake shop, to get some birthday treats for Greg. This evening he has an open house, so won't be home until late. I decided I would head to the school with the tasty treats as a surprise. I set out, determined to walk there, having researched its location. As I started out, it started to rain. I also realized I was hungry and would need some nourishment for the trek. I stopped at a place called Candies, which is like a quick food place, that has both Indian and American fare. While waiting for my mushroom/cheese omelet, they had a big flat screen TV playing some traveling circus, the same one that was on last time I was there. I've heard this place is a popular after school spot with the teenagers of Bandra. The rain kept coming down. So I braved it and returned on my journey, passing a sewer bubbling over like a small volcano. And I'm walking in this... I get to the area the store is located and start wandering, asking a few people where the cupcake shop is, and no one knows. Someone tries to tell me about another cake store. I show someone the address and they recognize some part of it and point me back the way I came, up a hill. Another person tells me to keep on going. Finally, at the bottom of the hill, there is the brilliant blue and brown sign of Butterfly. Yes! I jump on some bricks through a mud puddle and go to open the door. It's a small shop and it's humming with activity. I later find out that Raksha is today, when sisters tie decorative strings to male members of their family, who vow to always take care of them. So, naturally, sweets are also devoured since it's a celebration. And...it's...closed. "We open at 1:00pm." Ahhhhhhhh!!!!! I really almost break down crying. You're kidding!! I have to come back. I slump away, jump in a rickshaw, and hole up in the flat. Two hours later, I take a deep breath, get back in a rickshaw, and head back to Butterfly. Repeating in my head, "you can do this, you can do this." They are open and very wonderful. One of the owners, Sarah, who I think is a former Miss India, introduces herself and has someone help me. After placing the order, I buy one of the yummy cupcakes as a treat. Then I step back out into Mumbai, renewed and feeling good from my sugar high. The cupcakes came on time today and I delivered them, after getting through the "fortress's" security. It took 15 minutes to find Greg, but he was grateful and everyone loved the tasty morsels. In my excitement, I completely forgot to take a picture, so I've included the facebook page for the shop: http://www.facebook.com/group.php?gid=216098996967. Quote, "These are the best cupcakes I've ever had." - Rory, HS Biology teacher extraordinaire.

Finally, on Wednesday, I got myself out to the Bandra train station, onto the ladies only, second-class car (for Rs 6 - about 11 cents) and got off down at Grant Road. My destination was a gallery showing a photographer's work. Proceeds went to Save the Children India, who I will start volunteering for in two weeks. Wonderful work and an interesting technique with black and white film. I was told it's a very old technique not really used any more. I had taken a taxi to the gallery and my goal was to find my way back to the train station. As I wandered around, I realized my stomach was growling. While looking for a place to eat, my eyes came across a window with Ganesh statues. I was drawn inside, to walls of Ganesh, Shiva and other Hindu gods. Sweet! I didn't bring much cash with me, so I settled on a small Ganesh and two long, colorful strands of wooden elephants and cloth balls. Perfect to hang in our doorway. A colorful welcome for guests. It looks great!! I left the store and came upon a busy Indian restaurant. I peaked my head inside. It was dim with fluorescent lights, several rows of tables with bench-like seats, and filled with men. I asked the cashier if I could eat here, feeling like a complete outsider being a woman. He nodded yes and someone came to take me to a seat across from someone just finishing up. I sat down, feeling eyes bore into me. I ordered Paneer Masala, chapatis, and a sprite for about the equivalent of $1.50. It was delicious, filling, and I didn't get sick! Yea! This was the type pf place I remember eating at before, not like the many upscale restaurants that are around Bandra. I made it back to the train, which was much more crowded. When I tried getting off, I fought a sea of woman shoving to get on, almost being pushed back into the car. But I elbowed my way out. Whew! That was crazy.

So, Greg's birthday was started off with cupcakes, cards, many facebook birthday wishes, and talking with his mom. In the Twyla tradition of celebrating birthdays for a month, I reminded him this was just the beginning. We have a weekend packed full with fun and next weekend we'll start off with a trip to some bike stores to buy Greg his birthday gift - an Indian bicycle!!
Posted by Greg and Twyla at 7:47 AM