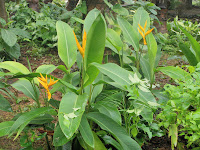 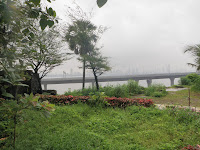 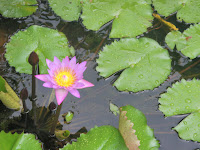 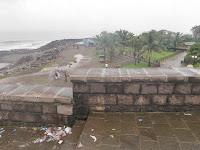 This past Friday, there was finally a lull in the rain after two days straight of precipitation. (I keep telling myself to enjoy it since there will be no rain for eight months). So, I was able to take a long walk to the southern part of Bandra called Lands End. The walk was mainly along a promenade known as the bandstand. There were many young couples about, sneaking some kissing under umbrellas. This really cracks me up because it's very taboo in India for any male/female PDA. But Mumbai, being more progressive, has allowed these young people to push those boundaries slightly. Many adults complain about this and there are several parks that prohibit this "nonsense because this is a family place." The one feature that I LOVE about this promenade is there is a short wall separating it from the road. That wall is decorated with a mosaic of broken pottery. It's beautiful and glistens in the sunlight. This wall is several kilometers long, so I spent most of the walk staring at the wall.
TheTaj hotel (There are several Taj hotels in the city, the most famous one being downtown) is the first thing that you come upon at Lands End. At first I wasn't sure where to find the first that I had been told about. Then, walking through the parking lot ends one at the gate leading to the fort and a beautiful garden area. The fort itself is pretty unimpressive and it seems recently built, rather than a piece of history. I haven't been able to find its story yet.
Next, I wandered into the garden. It was lush, with an amphitheater, meandering paths, and wonderful views of the ocean and city. Very peaceful. I love finding these hidden gems amidst chaos. Afterward, I treated myself to a cup of tea and samosa at Cafe Coffee Day and just missed a short burst of rain while looking at the ocean, enjoying my snack.
Posted by Greg and Twyla at 9:52 PM