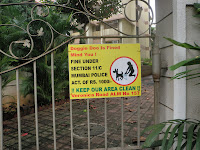 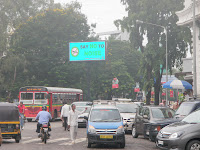 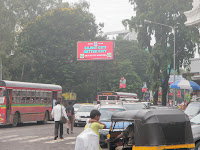 I figure no travel blog would be complete without some funny sign entries. Two are on an electronic billboard that gives public service announcements to change driving behaviors. What's funny about this is a large portion of India's population is illiterate and it wouldn't surprise me if many of the rickshaw drivers are illiterate. Honking is a never ending sound in Mumbai, so this sign is attempting to encourage less of it. One of India's attempts to be more civilized? The other was near my friend, Ysiad's flat. He pointed it out because it's his favorite sign so far.
Posted by Greg and Twyla at 7:15 PM