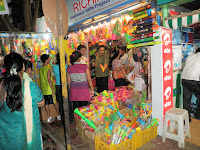 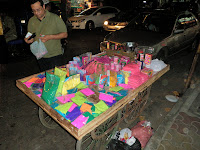 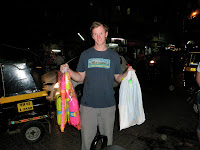 I first heard about Holi when I traveled to India eight years ago. I heard that "anything goes" and some of my friends wanted me to send to alcohol from the States for Holi. (Devout Hindus do not drink alcohol and in Varanasi, at that time, you had to go to expensive hotels to buy any). Thoughts of color had me putting Holi on my "goals in life" list. Since then, seeing Bollywood films and reading about Holi, I had a picture of complete chaos. This past week I kept hearing about "Holi gone bad" stories. From skin being dyed colors for weeks, to eyes being burned from toxic dyes, to crotch groping...I was worried something would happen and all my fun would be spoiled. 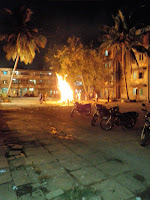 Holi is actually a two day festival that celebrates the devout Hindu prince, who refuses to worship his father over Vishnu, one of the gods. His aunt (Holika), who is fire resistant, is enlisted to kill her nephew by pulling him into a fire, ends up burning because Vishnu saves the boy and takes her power away. So, on the full moon during March, all over, this is enacted large bundles of logs and fronds being burned. Next to us, the apartment compound had a 15 foot tall pile they burned. When the fire raged, people would circle the fire, dropping water as they went. As this happened, excited children pounded them with plastic bags filled with water. This was expected and there was a lot of laughter. Greg and I huddled against the building to be out of the line of fire and watched the spectacle.

The next morning, we headed over to our friends', Reid and Rachel, flat for brunch and then headed off with our expendable clothes, olive oil rubbed on skin and 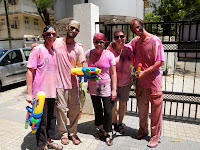 hair so the dye would not stain, and water guns ready to go. We rode our bike to the brunch and I was fully prepared for a colorful assault. to my disappointment, the streets were quiet and peaceful. We were more of the spectacle being white people on our bikes with water guns in our baskets. It was amazing to ride down such empty streets, so much so that I rode right past Reid and Rachel's place. 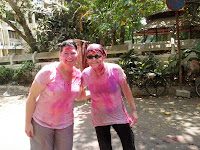 After brunch, we made it to the outside of the building and neighbors were starting their own Holi celebration. We joined them, playing with the kids, throwing powder, shooting water everywhere and eating sweets washed down with a Kingfisher that the neighbors insisted we share with them. After refilling our water guns, we set out to roam Bandra. Our firs 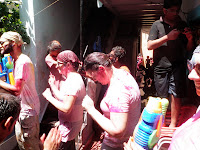 t encounter were a gang of other expats. One of them got Greg pretty good, right in the face. Leave it to the expats to be the most violent group out there. We had a rickshaw drive by done by another ASB staff member, but we made sure she didn't get away without a good soaking. A family of Indians was in a car, stopped, and we all smeared each other's faces with a "Happy Holi!" This ended up being the most common encounter, though most people were on foot. We ended up down at the sea in the fishing village. They invited us down some na 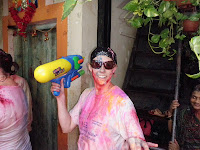 rrow walk ways and we joined a family dancing, dumping buckets overhead, and singing. I was impressed when a very intoxicated fellow came into the little courtyard and he was immediately turned the other way respectfully. We made it down to the beach area, after a full color and water battle with a group of kids. They were ready for an ambush, positioned on roofs, behind walls and on 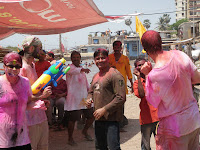 stairs. When we had to walk back through them, both Greg and I were also egged. Greg's hair was amazingly shiny today due to the extra nutrients he received on his head.

Overall, I was pretty amazed by the manners of everyone, t 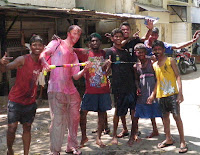 here was no groping and I felt very safe. I would not go out by myself or without a male, but I had nothing to worry about. Next year we'll start earlier so we can have even more colorful battles. This is the one time that Indians are up early to celebrate...then many are in an inebriated slumber by 2pm. 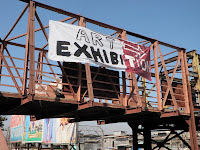 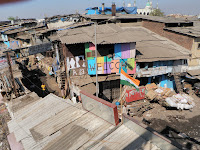 Back in January, our friend, Tash, had some artists staying with her. She met them one Saturday when she went down to Dharavi to coach some football (soccer) with local kids. They were in Dharavi for three months, getting to know the community, living there and creating art pieces with the community. The culmination of their work was then opened up to Mumbaikers to experience. I use the word "experience" because what made this exhibition was the interaction of each piece with the environment and community members. The art work was woven along a narrow, winding road, amidst the m 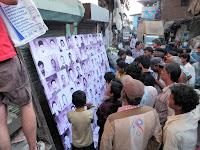 any industries working behind the tin walls of 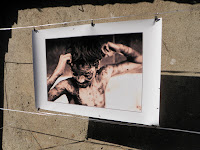 Some of the art were signs naming the trade happening in a room. Most of the pieces used recycled 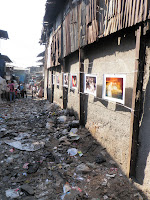 materials, even materials from another artist's exhibition that occurred the week before in Bandra. One of my favorites was "The Beehive," which was made from materials used to create a wax cannon in the prior art show. In the beehive was a recording of the sounds heard in Dhuravi, which sounded much like a beehive might sound. The red wax was also used on a pi 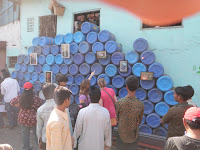 ece of corrugated tin, which the artists had children through the red wax at the tin. Mediums used through out were paint, sculpture, film, audio, and photographs.

It was a memorable and remarkable experience! The artists are hoping to show pieces in the US, so k 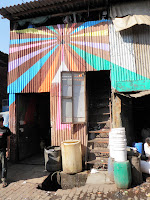 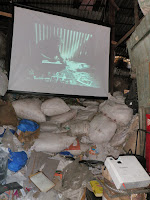 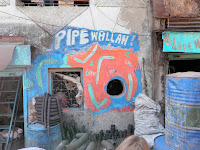 your eyes open in case it come 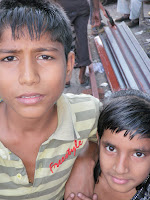 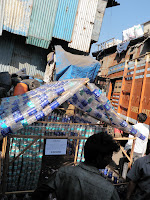 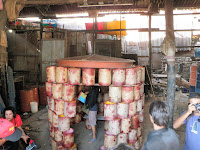 Posted by Greg and Twyla at 8:39 PM No comments: 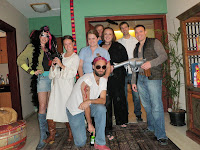 As I was downloading the Mehndi pictures, I discovered other pictures that we had neglected! About a month ago, one of the Early Childhood teachers and her husband had a joint b-day party. It was at a bungalow overlooking Juhu beach, north of here we live. They provided an array of delicious food items and an open bar. The food and bar overlooked a beautifully lighted swimming pool. There was a room facing the pool where a DJ spun some tunes. The theme was Saints and Sinners and I was pretty impressed with costumes, especially two of the counselors. One was a Sadhu (a Hindu saint) and the other a "gold digger." The only picture we have is pre-birthday party, at Reid and Rachel's, where a bunch of us met to catch school vans to the party. Yes, school vans we rented to get us to this shindig. After I got ready at our flat, I realized there was no way on earth that I could walk the ten minutes to Reid and Rachel's, so I took some of my gear off and the re-donned it at their flat. You can't see Greg at all, who attempted to be Sachin (India's cricket hero and number one cricket player in the world). Mmmm, I had to give him a D for it. He just does not understand the importance of costumes creativity! I have to thank Shannon, aka Princess Lea, for my outfit...but the question is, "you brought a tube top and mini skirt to India because...?"
Posted by Greg and Twyla at 8:12 PM No comments:

Mehndi is the Hindu word for the henna designs that Indian women, especially brides, have applied to hands, arms, feet, and lower legs. I've had it done twice on my hands so far and this weekend, two other women in my building and I (TyAnne and Jenn), had ours done. Another example of home delivery! TyAnne and Jenn both have a woman come every week to give them or their husbands a massage. This woman told TyAnne about friends of hers that are very good in Mehndi and would 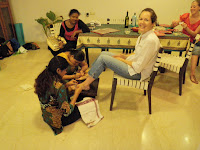 she like them to come by. So, TyAnne arranged for them to come Sunday evening and we had a Mehndi party. We had a wonderful spread of snacks, wine and G&Ts, while two women applied Mehndi to our feet and my hands. 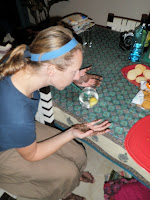 "The henna used for mehndi comes from a bush called Lawsonia Inermis which is part of the loose strife family and is grown in the Sudan, Egypt, India, most of the North African counties, The Middle East and other hot and dry places. The bush is also grown in Florida and California for his ornamental appearance and often grows to be quite large, ranging from six to twenty feet in some cases. The lance- shaped leaves from the bush are harvested, dried and then crushed to make the henna powder." (http://www.essortment.com/mehendi-36043.html)

After the Mehndi is applied, it takes about two hours for it to dry and start to flake off. What this means is you can't walk around much if it's on your feet and if it's on your hands...well, you have to have a "helper" do everything for you. When Suzy and I had this done in Rajasthan, Greg and Ryan had to help us with bags and shaws when we went to an evening dance performance. Greg helped me this time by getting me a straw for my G&T and feeding me a cookie. He really likes doing this and can't wait until the next time I have Mehndi applied! :)

The women who applied the Mehndi were very good and fast. They've been doing it for ten years now. For a bride, four people work on her (one per limb) and it takes four hours! That is super detailed. I was told this week that having Mehndi on your feet is usually a sign you are engaged and the darker it is, the more you husband and/or your mother-in-law loves you. The thing with this is the three of us have a huge advantage with our white skin. So, all the Indian women at ASB were telling me how much Greg loves me and giggling. Very cute. 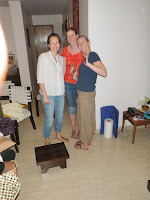 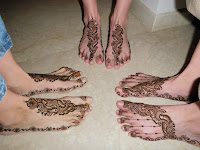 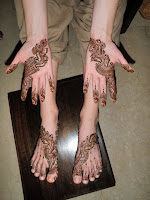