Bangalore Airport – there really are too many people in India

Our overnight train from Hampi to Bangalore arrived at 6:30am. I knew when booking our plane tickets to Fort Cochi, we’d have only a little time to get from the train station to the airport. We haggled and got a taxi for a reasonable price to the airport. There was some tension with the worry that we would miss our flight. Our taxi zoomed through Bangalore and then came to a stop next to another taxi. We were informed that we were to switch taxis. The two drivers bantered back and forth, the second driver not happy with the price. I got in the middle of them and said, “stop arguing, we have a place to catch!” They looked at me funny and I rounded our driver into his seat. At that point we went from zooming through Bangalore to being, literally, THE slowest moving thing on the road. I think I saw some children and chickens running past us. When reminding the driver about our need to get to the airport quickly, he responded, “no problem, there is fog, your flight will be delayed.” We were all like, “Riiiiggghht. Speed up!” Of course, as we got near the airport, the fog grew very thick, maybe about 30 feet viability.

At the airport, our flight was not listed. We were worried that we had missed our flight…and in the back of my head I wondered if the flight had been cancelled. I asked around and we were just told to wait in line. (A very long line). When we made it to the counter, our flight had been cancelled and we had two hours of waiting time until the next flight. We all laughed at this and were relieved we would have time for some breakfast. The Bangalore airport is brand new and gleaming…but, when all morning flights are delayed due to fog, it can’t handle extra plane loads of people. After my mom and I waited in a ridiculously long and slow line at security, we then we headed to the jammed packed food court (Greg was on table duty, while the rest of us stood in the long, winding line being bumped by people trying to walk through). After getting our meals, I waited for about 15 minutes for our mango lassis. When my mom arrived to release me from my duty to go and eat, the lassis still had not come. I slithered through the crowd to our table, looked down and saw that Greg had eaten my breakfast and left his for me. I almost through myself on the ground and kicked and screamed like a two year old. I didn’t say anything besides, "I need to go for a walk," and left. My walk, of course, was more like a shuffle as I wiggled through the crowd, found a bathroom, recollected myself, and pushed my way back to the table. I ate what I could of the breakfast while not making eye contact with anyone of my travel partners. Needless to say, after putting food into my body, I could suddenly deal with life much better.

We ended up finding four seats to wait the next hour and a half until our rescheduled flight boarded. I tried not to think about the five hour car ride ahead of us once we reached Fort Kochi…

Posted by Greg and Twyla at 7:08 AM No comments: 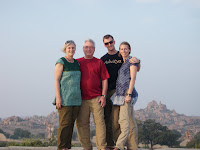 After a grueling semester at school for Greg, finishing up with my clients, and my mom and Bill returned from their jaunt to Arangabad, we boarded a plane on December 18th to Bangalore. Greg and I have done all of our trips in India up north, so we decided to head south. The first stop was Hampi. Greg and I first learned about Hampi from a climbing movie called “Pilgrimage” with Chris Sharma, Nate Gold, and Katie Brown. We’ve heard about it since then from others who have visited, seen a few pictures and it was on my list of places to go before we leave India. (In case you haven’t heard, Greg and I will be leaving India in June. We aren’t sure yet where will land, but we are deep in the process of job searching). Pictures we had seen showed marvelous granite piles of rock dominating the landscape, with temple ruins resting below. I couldn’t wait!

After we reached Bangalore, we hired a taxi and decided to catch a bite to eat before going to the train station. We had about four hours to kill and two of those hours were spent in Bangalore traffic, which was pretty bad and rivals Mumbai’s. The Lonely Planet Guidebook lead us to a hip. westernized shopping area that was jammed packed. We found the little hole in the wall restaurant and were happy with the tasty food it provided, which we wolfed down in a frenzy. Then, we had the task of finding rickshaws to get us to the train station. I was feeling a little doubtful because of all the traffic and lack of public transportation on the roads. As we headed to the main street, a couple of rickshaws pulled up and we started to haggle prices when a policeman came up and told up there was a fixed price rickshaw stand 100 feet away. Greg and I couldn’t believe it! Another place in India, besides Mumbai, where you didn’t have to haggle for every rickshaw ride! Sweet! As we drove to the train station, I admired the streets’ layouts, noticed less honking, and a generally calmer atmosphere…maybe Bangalore isn’t too bad.

We arrived at the train station in plenty of time to find our platform, find our assigned train car and settle into our cabin. We were all tired and ready to sleep. But, we had to wait for our bedding to arrive. When the train started going, a little Indian man arrived with the rest of our bedding and was thoroughly disgusted with Greg and my attempt to make up one of the bunks. He brushed us aside and told us to sit. He quickly tucked and folded the sheets to a neat, welcoming bed. He made up the bottom bunk and then shoved us to the other side, quickly making up the other beds. We gave him a little tip and then fell into a rocking slumber. 8 hours later, we woke up in Hospet, the closet train station to Hampi. Overnight trains are great that way. You get travel and sleep at the same time and then have the day to tour about. Our rickshaw ride to Hampi was beautiful. We sped past fields surrounding rock out-croppings, small huts and temples, and colorful locals tending the sugar cane fields. After about 30 minutes, we made a left turn, paid an entry fee into Hampi, and descended into town. It was a spectacular sight and a climber’s dream. I felt like running up and hugging the granite rock piles. They stretched out as far as the eye could see. 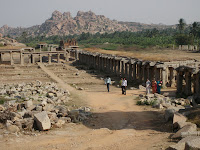 We stayed at Padma Guest House, which was clean, friendly and had a great view of the Virupaksha Temple, which is sought after by many more pilgrams than tourists. There are daily broadcasts from the temple each day to greater India so that worshipers can witness and participate in the comfort of their own homes. We spent two days touring around Hampi in two rickshaws with Johnson and his buddy, who gave us bits of info about the different sites we saw. I was truly impressed by the sheer size and grandness of this former empire. I had no idea that the Vijayanagara Empire lasted for so long, had such a presence in Southern India and its technologies rivaled the Roman Empire! Everywhere one looks one sees another former temple nestled high between the granite rocks. We rested our weary feet and filled our bellies for most of our meals at Mango Tree, one of the only restaurants in town and one of favorites in India. All of the low tables face the lazy river, under the shade of gently rustled trees and the food and service are wonderful.

Our third day, we crossed the river and relocated to Anegundi for one night. We had a bit of a miscommunication and ended up staying is very nice cottages. The grounds were beautiful with chicken, guinea fowl, and ducks wandering around. We explored the small village, took some walks to visit nearby temples and hiked up to the monkey temple that evening to see the sun set. Our final day, we made our way back to the river, had our last meal at Mango Tree and then caught the overnight train back to Bangalore. We were all happy with our time in Hampi. Greg and I decided we could have stayed longer to explore more and even try out some of the famous bouldering routes. (We did put our shoes on a couple of times to scramble around, though we had to be careful of the toilet spots chosen by villagers all around the rocks. It is India after all! 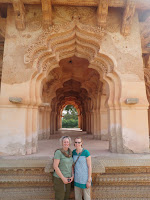 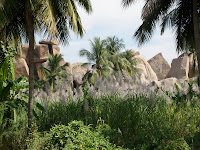 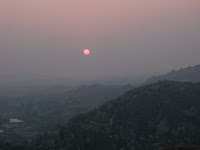 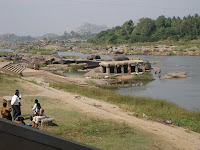 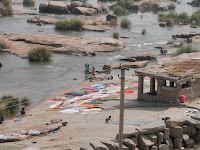 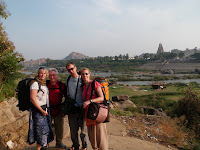 Posted by Greg and Twyla at 6:21 AM No comments: