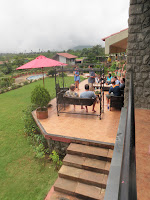 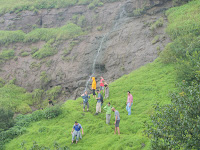 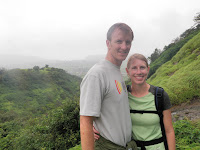 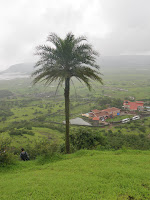 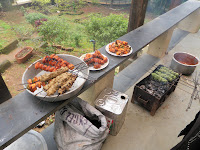 Saturday, we spent the day in Lonavala, a 3 hour trip by bus, but much faster by car. One of the ASB employees and her husband have a beautiful home there and graciously hosted the outing and picnic. We started out at ASB, piling onto two buses. There were not only the teachers, mainly white folk, but also administration and support staff, who are Indian. Much nicer to be a part of a more diverse group for the day.
The bus trip first took us through northern Mumbai suburbs and slowly the buildings lessened and green fields and hills began to appear. When we hit the "hills," we started the long, slow ascent up a swooping three lane highway. The views were spectacular. Steep, lush hill-sides with waterfalls pouring down their slopes everywhere. Deep valleys. Think Hawaii, only bigger. Looking ahead, one could see the switchbacks and bridges we would soon be crossing. When we turned off the highway, we were in a more rural India. This was more of my memory of India. When we reached Lonavala, we found out that on weekends they closed the road to the house to buses. So we waited and waited and waited. I think we waited about an hour until we found out the back way to get to the house. The road was dirt, rutted, and narrow. The house was nestled into the hillside, overlooking the misty valley. It was a spectacular place.
While there, we ate, lounged, hiked, ate, and lounged. They fed us kebabs of tandori chicken, chutney chicken, tandori paneer and potatoes, and roti. Yum! After our hike, they had cooked up birianyi, a spicy rice and vegtable dish, also having two with meat in them. Greg was also psyched to be privy to the host's fine liquor selection.
The hike was short, but bursting with color. Our directions were, head up the path until you reach the palm tree, then hike right along the hill until you see the water fall and hike up to it. Indians are all about landmarks! (I don't know if I've mentioned yet that getting around town, you can't use street names because a lot of people don't know them and there aren't signs. So, everyone uses landmarks to describe where they want to go. Quite a hard adjustment when you are new and don't know where anything is). The trail was slippery and we found walking on the grass was less slippery than the moss covered rocks (opposite to my way of thinking). It was also fairly steep and we switch-backed our way up. The view of the valley was spectacular! The vivid green against the gray of the sky was brilliant. There was a temple nearby that Greg and I tried to hike to, but turned around because the slippery rock was too treacherous. Our hike down took us near some cattle, that had various "limpy" horns. One of the kids with us suggested that the cows had not had enough milk to make their horns strong. Ha!
The ride home was a bit shorter and we were exhausted after the day, which started with getting up at 5am to go for a run before catching a ride to the school. But, we are both excited to explore more weekend getaways in the hill stations hear the city. It's a welcomed break from the hustle and bustle of the city. Fresh air and no horns honking - I've never appreciated those two things so much.
Posted by Greg and Twyla at 10:24 PM