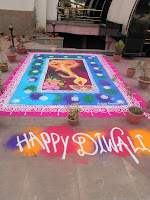 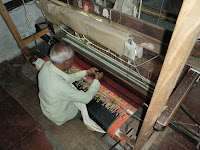 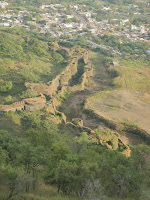 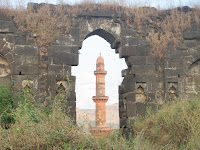 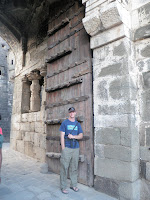 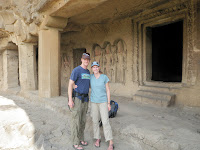 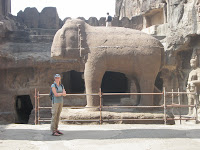 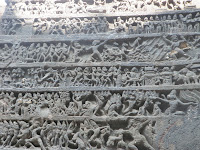 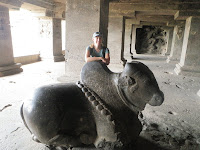 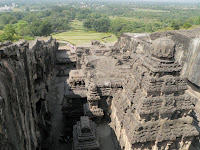 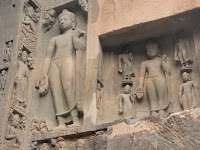 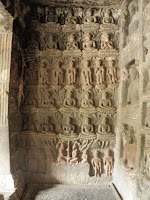 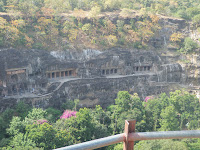 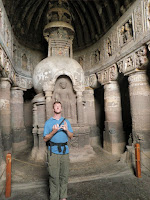 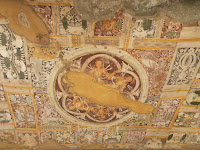 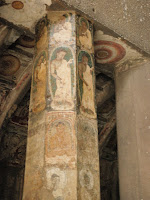 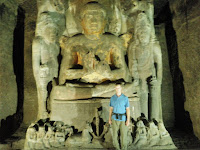 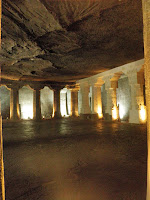 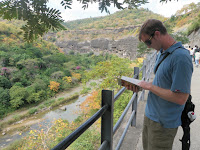 The historical significance of Aurangabad and surrounding sites are the highlight here. Aurangabad was the capital of the Mughal empire for a brief time when the last Mughal emperor moved the entire city of Delhi to Aurangabad in 1653. Traveling around the city, you can see remnants of the city's old walls and gates. This city is the jumping point to the Ajunta caves (two hours away) and the Ellora caves (30 minutes away). Before Greg and I came to India, we saw a slide show from the Mesa State outdoor club's winter break trip to Southern India. When they showed slides of these caves, we decided right then it was a place we were going.

The Ajunta caves were carved and painted by Buddhist monks from 200BC to 650AD. Think of these dates as you look at the craftsmanship in the photos. The caves are set into cliffs overlooking a serene creek, with a waterfall and the hillside is dotted with colorful foliage. It made me want to sit down and meditate. These caves were lost to humans for centuries until a British hunting party discovered them in 1819. The unique thing about them is a lot of the painting is still present, whereas at Ellora, there's virtually no painting left. It was amazing to see and we thought to ourselves, what was going on in North America during this time... India and Asia truly was advanced by then. The only draw back to the day was having to enter and exit from the bus (which took us to several kilometers to the base of the caves) to our hired car through a souvenir marketplace with very pushy hawkers. One even followed us to our car, still trying to sell Greg something as we backed up and drove off. (Our driver had warned us, "don't buy anything from Ajunta).

The next day we went to the Ellora caves and then the Dhulatabad Fort. The Ellora caves are much more accessible, thus a little more crowded and hawkers trying to sell you things everywhere, instead of just the parking lot. But, they were much less persistent and mainly left us alone. These caves were carved by Buddhist, Hindu, and Jain monks over many centuries. The Buddhist were the oldest from 600-800AD and the Jain caves were the youngest from 800-1000AD. These have never been "lost" so people have been coming to them since carved to pray and see the amazing craftsmanship. The most famous "cave" is the Kailash Temple, which represents Mt. Kailash, where the Ganges begins its trickle and represents Shiva. These caves were mainly built top to bottom. The Kailash Temple was built over ten generations and is very detailed and intricate. Some of its paintings were still visible.

After a long, hot day, we mustered up our energy to finish the day off at the Dhulatabad Fort. We thoroughly enjoyed this mid-evilish fort. The fort has a number of protective features built into to protect itself. there's an outer wall, 5km around the old town. Within those walls, the commoners lived. Further in was another wall protecting higher classes. The third wall surrounded the fort and from there the journey became quite steep. Stairs were cut at different levels so any intruders couldn't just run up the stairs. There were many cannons, which were intricately carved. The largest, within the third wall, could rotate 180 degrees, so if it fell into the wrong hands, it could not be used to blow up the fort. A series of gates at the third wall were built to fool anyone who got this far and trap them. (All the doors were huge, heavy and wooden with metal spikes in lines down the entire door). The there was a wet moat to cross, which lead to a series of steep caves that hot oil and water would be poured into to stop invaders. We just had to deal with the many bats in the caves as we climbed the musty stairs. Finally, a long set of stairs wound around the rest of the hillside to the top of the fort and an amazing view as the sun began to set.

We had an extra day in Aurangabad, so we went to see the smaller Aurangabad caves, a Himaroo Weaving Center where we saw traditional ways of hand weaving and I bought my first sari, and took in a bollywood film before the fireworks of Diwali began. The firworks were another sight to behold. We snuck up onto the hotel's roof top to be greeted by a colorful war zone. EVERYONE was setting them off for HOURS. The air was thick with smoke and I wondered how many people were going to be injured that night. We heard a loud series of bursts from below and saw some of the familes staying at the hotel setting off fireworks. They lighted a huge box. We watched until all of the sudden three gold lights shot up about twenty feet from us. #$@%!!! We ran to the other side of the roof and right above us, large fireworks exploded. Pretty amazing. After Greg was almost hit by a stray one, we headed downstairs for a snack. 4th of July has nothing on Diwali!!

Happy Diwali! (The powdered designs are the rangolis I wrote about a few blogs ago).
Posted by Greg and Twyla at 9:51 PM