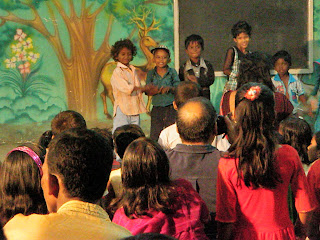 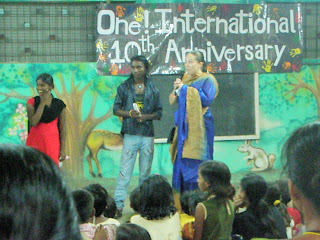 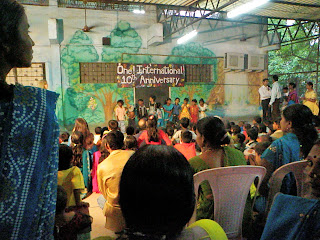 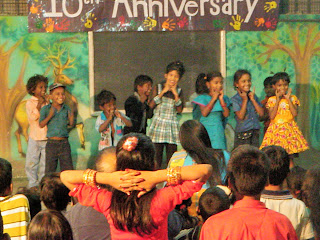 Over the past four months, I have been volunteering at One International, a school for kids who are basically homeless and don't have the chance to go to school becuase they don't have the proper papers. One of the parents at ASB, Ali, organizes for us to go on Wednesday to help the children with their English language skills. We sing songs, play games, do worksheets and lots of other fun things.

The past two weeks, all the children have been preparing plays, dances and songs for the 10th annual Gala to celebrate the school, teachers, parents, and students. Ten years ago, Tania started One International with 3-4 children from the Khar fishing village. Today, there are two schools with over 200 students from ages 4-18! It's pretty amazing. After the performances, there were awards for best grades, best attendance, honors, most improved student, and student from the year. Students were chosen from both schools for the awards. In the youngest class I help with, 4-5 year olds, there were two boys who both received honors. One of them ended up receiving the student of the year for the entire school (the little guy with the black jacket and gray shirt on in one of the photo)! After receiving his award, he sat next to the other honor student (the one with the crazy hair and pink shirt on in the same photo), turned to him and stuck out his tongue. A little competition going on thereat age five!

The gala was held at St. Joseph's School, very close to our flat. Students and families were bused to the location. You'll notice in the pictures how excited the students are to perform and that everyone was dressed in their best. It was a pretty big deal and I was honored to be apart of it all!
Posted by Greg and Twyla at 8:41 PM