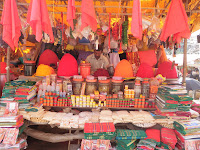 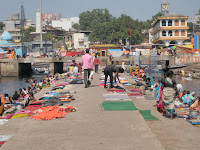 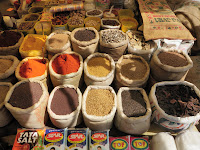 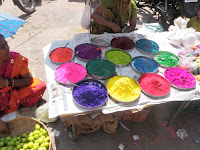 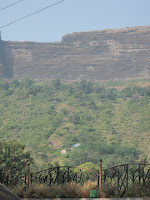 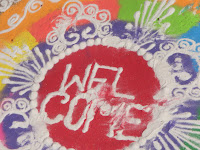 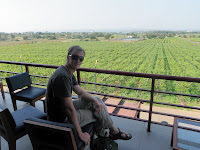 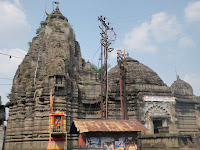 After Greg and I came back from Week Without Walls, we had one day to repack for our week long trip around Maharastra. First to Nasik, wine counrty and holy city, then off to Aurangabad where to World Heritage sites of the Ellora and Ajunta Caves are located. Saturday morning, we dragged our weary bodies out of bed at 5am in order to make our way to the Victoria Terminus train station in southern Mumbai. I was very proud that we found the correct train to get there and then found the Tavopan Express, which would take us 3 and a half hours north to Nasik. I had booked us AC Chair seats, which weren't too bad at all. The car even had a waiter that took orders for food and drink and brought them to us.

When we arrived at Nasik, we were immediately accosted by a taxi driver, who we told we wanted a rickshaw. He "gave" us to someone else and we were whisked away. The rickshaw was decked out inside with a fancy pleather seat that had a design embroidered into it. When we arrived at our hotel, we were immediately disappointed to find that the meter is not used and the driver demanding 150rs. This was WAY more than the same ride in Mumbai. We argued with him for awhile, then went in and asked the hotel how much the ride costs. He stated 100rs, in a quiet voice. This was still expensive, but not able to do much about it, we gave the driver the money. (Greg reminded me that we were only haggling over a dollar, which is true). We pretty much walked the rest of the time in Nasik, except for travel outside the city. Nasik, we felt was just as busy, congested and polluted as Mumbai. I struggled a bit with this since after Dharamsala, think I had the expectation of a peaceful town.

Nasik is located on the Godavari River, also known as the Little Ganges. It is a holy river, where pilgrims come to bath away sins, pray, and even release loved ones' ashes into the river. Mind you this goes on while clothes are being washed, dishes cleaned, and other daily happenings. The result, though is an array of color and energy. Along the river there are many Hindu temples and Greg and I found many more just wandering around the streets. The markets and roadsides were filled with all the colorful decorations, powders, and diyas for Diwali, as well as the usual spices and food stuffs. There were many friendly people and one helped us find our favorite place to eat in Nasik, the Ganesh Lunch House. It was run by a family, who kept heaping food onto our plates despite saying we were full. Yummy! Really, this was the only good place we found to eat. The rest ended up being quite bad. One was a bar and restaurant, which I suggested trying it, knowing Greg would probably love to have a cold Kingfisher beer. We went upstairs and sat down. I immediately noticed we were surrounded by a number of drunk men and it was really smoky. I was fighting a head cold and finally told Greg I needed to leave. As we got up, they server asked us what was wrong. We told him the smoke was bothering me, so he directed us to another room. The room was FILTHY! I think they had a party last month and hadn't cleaned up yet. While Greg quickly drank his beer, a cockroach was trying to get friendly with us. Aren't they suppose to be nocturnal?

My first Hindi class I took before we left paid off. I think over the week we answer the questions of "What's your name" and "Where are your from" a million times. I taught Greg the phrase "Mera nom Greg hai," which means my name is Greg and the Hindi word for American, "Umreeka." Everyone got a kick out of that and tried to speak Hindi to us.

From Nasik, we took a day trip to Trimbuk, 30 km away. We hiked up Brahmagiri Hill, where the source of the Godavari trickles and there are several temples. The walk up had many small Hindu statues lining the stairs, which gave people a good excuse to stop and catch their breath. At the top, we decided to try some offerings, but our "guide" pretty much sucked and we still have no idea what the different parts of offerings mean. Plus, I ended up with a plastic bag with two colored powders and a sugar treat leftover from the "Puja Package," which very aggressive monkeys wanted. One monkey even touched my leg, freaking me out. I think he would have climbed me accept someone shooed him off. We walked down to other temples that were carved out of the rock, despite being stalked by a hissing, teeth barring monkey the entire time. We armed ourselves with rocks until we reached the last temple and scrambled inside, forgetting to take our shoes off. The monk inside was very nice about it. Finally, I had the bright idea to put the white, plastic bag inside Greg's hip pack and the monkey let us alone.

On our way down, we were asked to join a group of men, who were with a guru. We decided, why not, and hung out for awhile, talking with the one man who could speak English. When we asked about places for lunch in Trimbuk, they told us we would join them for lunch. We eat on the floor in a mud, thatched hut off of large banana leaves. The food was good and Greg and struggled to stay seated cross-legged for so long. Not so flexible in the hips as Indians! After the meal, we continued our journey back to the bus station. I realized later, we had missed seeing one of the 12 most important shrines of Shiva, but non-Hindus aren't allowed inside anyways.

Also, I forgot to mention that Greg and I are now famous all over India. Over the week, we have posed for many, many, many, many, many pictures with Indian tourists. We were part of the attraction. It got to the point, I finally just refused and even told one group that it would be 50Rs , which I think they would have paid. Greg was a nice Midwesterner and never refused and had to make excuses for me.

Nasik is nestled into the wine country of India, so we did an afternoon and terrace sampling at Sula Vineyards, India's largest winery. It was sooo peaceful and relaxing. The countryside was beautiful and Greg and I talked about bringing our bikes next time. It was a nice break from India for a few hours to recharge ourselves. (Robin, we told them all about you and they would love to have you come out and do some consulting! Greg took lots of pictures of the equipment for you). An interesting fact we learned is the wine that they sell in India is not aged as long because Indians prefer a more sweet wine, as they are known for their sweet tooth. They do export wine and those have been aged longer. So, a challenge for everyone is to search for wine from Sula Vineyard. We were wondering to cost and what the taste is like. Generally, Indian wines are only so-so, but much more affordable here than imports due to high tariffs.

After three nights, we hopped on a bus to arrive in Aurangabad five hours later. We tried to get on a train, but the seats were waitlisted since it was Diwali week. The bus ride wasn't bad, Greg wasn't too cramped and we've now covered most of the transport options in India. All that is left is boat, bicycle rickshaw, camel, and elephant. Horse too, but Greg won't get near those.
Posted by Greg and Twyla at 8:38 PM