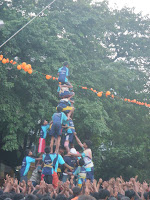 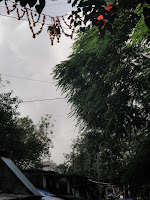 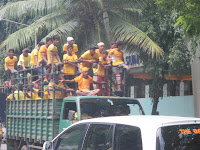 Yesterday I was trying to plow through to the end of "The Lacuna" by Barbara Kingsolver, which is a wonderful book and the subject of my book club later in the evening, when a loud, thunderous cheer arose. Ahhh! I need to get out there! Yesterday was Dahi Handi, a celebration of Lord Krishna, one of Hindus most revered gods. Lord Krishna, as a young babe, stole a clay bowl full of honey, one of his favorite things, so the celebration involves human pyramids trying to reach a clay pot (handi) high above filled with yogurt (dahi) and other liquids. The goal is to be able to crack open the pot, spilling the innards all over the team as they celebrate happily since they have one a cash prize and are to have a year full of good luck. There are clay pots strung EVERYWHERE! In Bandra alone I couldn't believe how many there were. Mumbai is one of the four cities in India that goes crazy over this festival.

I grabbed my camera and headed down to Hill Rd, where I had seen some of the pots earlier in the day and thought that must be where the cheering came from. There were huge, thumping speakers blaring, but traffic was still flowing and no teams were seen getting ready. I later realized that the cheer probably came from a truck load of competitors rolling down another street, heading to thier next destination. I took a couple before pictures and later on, while I was at my book club, Greg took during pictures and video of the party happening once darkness fell. (I'll let him post about that experience. It is funny to watch him dance among a large crowd of Indians).

Once Greg got home, I talked him into walking around before I needed to head over to my book club. We were trying to meet up with some other friends, when we heard music and cheering. Ahead of us a crowd formed. "Yes! Let's go!" I squealed gleefully. When we got there, it was a team of girls. I had read this was men only, so I was even more excited. The girls gracefully and carefully climbed on top of each other, the last one, with a bike helmet, reaching for the pot. She was just short. They quickly clamored down. After a few minutes they tried again and success! They cracked the pot, goo leaking out, and they tumbled down. Just around the corner, we located our friends and there was another pyramid about to begin. This pot was taller than the last one. The guys impressively stacked themselves up, up , up and out poured a red liquid. They were ecstatic and very happy to be having their picture taken. Our friend, Tash, had one of the bigger camera lenses I've seen in awhile and she was surrounded by excited Indian men.

I had to part after that, unfortunately. Here are some of the pictures while I was there and look forward to the rest of the Dahi Handi story from Greg... (I couldn't get this video turned, so it's sideways. You'll have to turn your computer. :) ).
http://www.youtube.com/watch?v=kEyqViVl1PM
Posted by Greg and Twyla at 3:06 AM