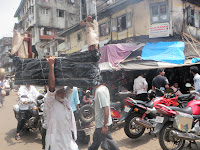 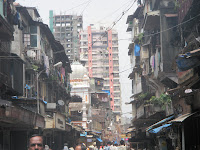 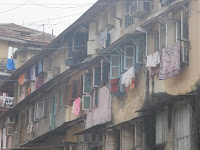 Mumbai has numerous bazaars and markets all over the city in which you can get just about anything your heart desires and then some. Chor Bazaar or "thieves" bazaar, is located in central Mumbai and is known for its antique furniture and curios. Walking around, it also has auto parts, with men disassembling cars and rickshaws right before your eyes, and shop afters shop of tools. There were a few shops that sold the horns for motorbikes, very important for navigating the streets of India. I went with a group of other teachers from ASB Sunday morning. I first poked my head into a shop selling statues of Hindu gods and Buddha made of many different metals and stone, as well as many other artifacts. It was a thin shop, barely wide enough for two people to pass each other. Everything was dusty. I wondered to myself how these artifacts made it into this store...looted from sites around the country? The man in the shop showed me some things, but it wasn't until he showed me an old spice box that he had my attention. These boxes varied in sizes, were wooden, had different carvings, and their lids slid off to the side, attached by a wooden nail. The inside of the boxes had varying sizes of compartments that were, at one time, filled with different spices or powder. I asked if he had any smaller ones and he said he did at another store. I followed him, winding through the bazaar, not able to keep up because I kept peering into other shops. We ended up at a store that had it's metal door halfway rolled up. He pushed it up and maneuvered some wooden boxes out of our way. The room had larger statues along with carved doors, windows and headboards. There was a beautifully painted shutter with Ganesh that I eyed. He showed me some other spice boxes and had a helper wash them, revealing some intense colors. He had another person take me to another show to look at more pieces, again winding around the bazaar. In the end, I walked away, not ready to buy anything or wanting it enough to really bargain for it. I wandered back to where I started and went into some furniture shops that had some great lanterns, candle holders, and spectacularly painted cupboards (which two other friends bought and did a great job with bargaining). We were only there for about an hour and a half, not enough time to thoroughly explore, but it whetted my pallet for another trip down and with Greg, who did not go because he had work to get done. As we headed back to the vans we came on, Reid and Rachel's buffet they purchased was hoisted onto an older man's head and he followed us through the bazaar. We all felt bad since he was half our height and probably in his late 60s. But, his neck is probably far stronger than any of ours. The pictures are of the area. Luckily, it was not crowded on a Sunday, which made for an even more pleasant experience.
Posted by Greg and Twyla at 8:18 PM