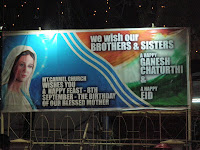 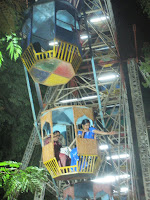 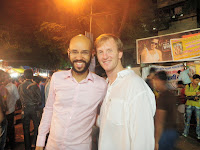 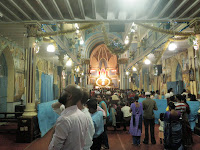 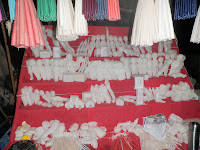 Our neighborhood is in a flurry of activity each night because of both Ganesh Chaturthi and the Bandra Fair, celebrating Mary in the Catholic Church, happening. Last night I took part in an immersion of a Ganesh statue with one of the ASB employees and her family. (That will be another post). This evening, after giving an offering to the neighborhood Ganesh statue, Greg and I met our friend, Wacumia (an ASB elementary school employee), and walked around the Bandra fair. Wacumia's flat is 1/2 a block from it. Think county fairs. There were some rides tucked around, the streets were lined with food stalls and trinket/clothes stalls. Hawkers were wandering around selling wonderful, gaudy toys. One was a birthday whistle that unwinds, only it shoots five feet up instead of like the US ones, which go out and only about a foot. It was crowded! We just wound our way through. I was fascinated by the rides because they were very rickety. I don't think safety standards would allow them in the US.
We reached long stairs that were lined with sweet stalls, music and book stalls, Catholic "trinkets" of much variety, and jewelry/clothes. At the top is St. Mary's Church, which was decorated for the occasion. The church's walls were adorned with wood carved pictures, depicting parts of Jesus's life in which Mary was present. We noted that Jesus and all other persons were brown, though everything for sale depicted a white Jesus. On the top of the hill, across the street from the door is a shrine to Mary. Many people went to both places (church and shrine) to give offerings of flowers, candles and wax body parts. The latter were available in stalls lining the street going down the hill. These parts, we gathered, were for people to either ask for help in healing or to give thanks for prior healing. We bought a few for several friends who are dealing with injured body parts. Wacumia thought that they were made of plastic becuase they were hollow and did look like plastic. So, he put a leg in his pocket and it broke. We were laughing pretty hard at this scene and wondered what that meant for our friend's ankle. He bought another and will be giving her both. As we decended, several people were worried that we were carrying the body parts away from the offending sites. We assured them we were not going the wrong way and they were for friends who would be back later, if they so choose.
Posted by Greg and Twyla at 7:19 PM