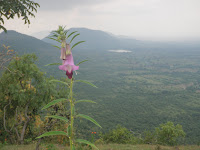 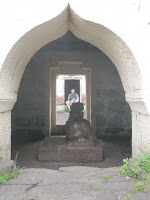 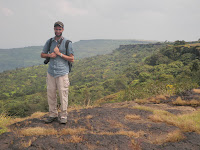 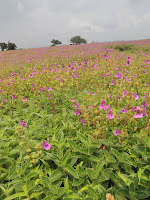 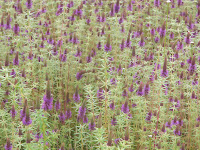 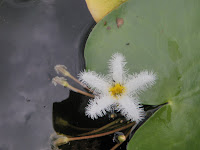 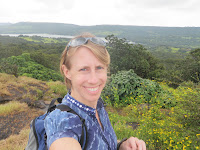 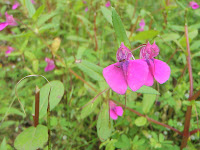 Over the three day weekend for Gandhi’s birthday, a friend and I headed to the Kaas Plateau in southern Maharatra in the Satara District. Our significant others were going to join, but one had too much work and the other was not feeling well. Luckily, we were both encouraged to still go.

The Kaas Plateau is not found in any of the typical guidebooks. It is a local Indian tourist spot during the monsoon, as the plateau becomes a canvas of changing colors with the rains growing a large variety of wildflowers from August-early October. When we were told about this beautiful sight at a meditation retreat in July, I couldn’t wait for this three day weekend.

We took an overnight “ish” train to Satara, arriving at 2am. We had hired Rajesh to meet us and take us to our hotel. It all worked out without a hitch. I think we were some of the first foreigners to stay at our three star hotel and we were the only “whitees” in the area for the weekend. Our first day, after a decent southern Indian breakfast of idlis and sheera, we jumped in the hired car and enjoyed the hour and a half ride up, up, up the steep hillside towards the plateau. It was green and lush around us as we breathed in the fresh air. The driver reported that “1 lakh” people visited the plateau last weekend. Wow! When we reached the plateau, we were not allowed to stop. The government had set up a bus system to transfer people from a parking area to the plateau. Amazing!! They were actually trying to conserve the area. I was very pleased about this. Our driver did his best to explain that we foreigners should be accommodated with the car, but they would not budge.

We spent awhile exploring around Kaas Lake, just below the plateau and there was evidence of the previous crowds from the trash laying around. Despite that, we didn’t have to wander far to get away from the trash and start seeing evidence of the flowers we would be seeing on the plateau. The lake was peaceful and we had our first snack while gazing at a patch of lily pads.

When we got to the plateau, looking out, one could see swaths of white and pink. Upon closer inspection, there were many varieties of flowers in white, pink, purple, yellow and blue. There were many large cameras with huge lens being toted around by others. I had my small point and shoot, which worked just fine at capturing the beauty. We spent several hours wandering around, having lunch and walking back to the parking lot. We opted out of having the bus drive us back. That evening at the hotel, we had an amazing Guajarati Thali for 110Rs and watched Dandia dancing for Navatri.

After a lazy morning, we set out the next afternoon for some nearby temples. The temples were of the Shiva variety, with one being filled with lingums. The hike up the ridge and exploration took about an hour. At the top of the ridge, we were rewarded with spectacular views of the valley below us. We started to hear what sounded like rain falling, but could not see rain anywhere. I guessed there might be a waterfall close by. Ha, I was very wrong. Just as we started back down, there was a light sprinkle. Then it became a light rain, so we pulled out rain jackets. Finally, it was a steady rain. By the time we reached the car, we were both soaked. But, by the time we reached the Kaas Plateau for some evening photos, we were both dry, except for our shoes. We found a beautiful meadow to explore as fine clouds settled in over the plateau. Unfortunately, we did not get to see the sun set from that vantage point, as was our goal. But, on the drive back down, the billowing clouds were a spectacular show as the sun faded away. After another fantastic thali dinner, we headed to the train station to return back to Mumbai.

For fresh air, getting outside, and wildflower viewing, it was a great trip. To find out more about the Kaas plateau, just plug the name into google and the sites available are endless. It’s a fun adventure to get off the Lonely Planet’s beaten path.