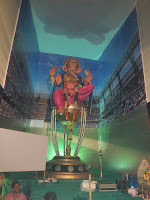 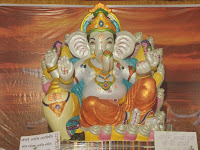 This weekend was the final days of Ganesh Chaturi, an eleven day festival celebration the Hindu God, Ganesha. Saturday morning, Greg and I got up early and took the train down to South Mumbai to get a tour of some of the larger Ganesh statues. We saw big ones and small ones, eco-friendly and plaster made, the cricket World Cup Ganesh, a Ganesh made out of over 80,000 buttones, a Ganesh made of plastic pearls, Ganesh with other Hindu gods and godesses, Ganesh in a forest...so many! 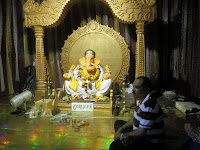 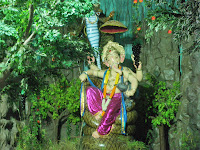 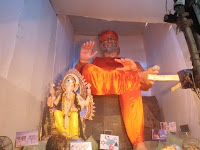 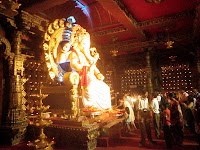 Then, Sunday afternoon, we jumped back
on the train with my friend, Claudia and her husband, and headed to Chowpatty Beach, where the largest immersion is held. It starts early afternoon, gaining momentum and one of the final immersions happens the next morning with the largest Ganesh statue. Chowpatty is known to be super crowded and have the largest Ganeshas in the city. We timed it right because after spending time on the beach, we started walking back against the crowds and saw four of the Ganeshas we saw the previous day being processed to the beach.
Enjoy the pictures. I've created a movie of the immersion photos which also includes some video clips. (Next post). Plus, the photo of me at the end with pink powder all over...this is the picture to go with my Facebook post. In the pictures you will see crowds, Ganeshas being carried into the water, floats used to carry the statues out as far as possible, puja (praying and chanting), and people just enjoying themselves. Remember, the water is very polluted and we scrubbed our feet thoroughly when we reached home and the thousands of plaster or paris statues only add to this nastiness. There is a campaign to encourage returning to using clay statues and eco-friendly paints. Some families now do a ceremonial immersion in a bucket at home and then keep the Ganesh for the next year. FOR PHOTO COLLAGE: http://www.youtube.com/watch?v=ubC4oxnHHNs.
Posted by Greg and Twyla at 11:44 PM