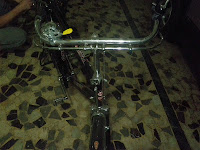 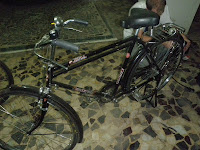 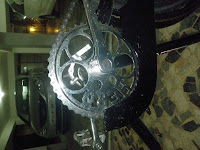 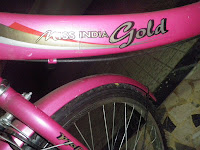 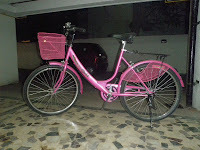 Finally, the long awaited blog about our Indian bikes from Hero! We've had them about a month or so and have been getting use to their "special" nuances. Both were about $70 and are solid as a tank. Greg's bike is the same that millions of Indians ride each day to commute or deliver any type of goods you can think of. After riding my bike around Bandra, I have a new found respect for the balancing act these men go through every day. Wow!
One of our mishaps has been with the tires. Both of our tires went low, so Greg bought a standing bike pump to get them back into shape. The only problem was...what the heck is this? The valves on the tires are not Shrader nor Presta. They are unique to India? Maybe these are the same valves in China? All I know is when Greg went to use the bike pump he ended up pulling out the valve thus causing opposite effect of the hoped outcome. Oops. Now he was able to practice changing his bike tube. This was quite a fun project for him, which took about two and a half hours. He's not going to be winning any races in the near future I can tell you that.
Changing the tire involved taking half the bike apart since most of it was connected to the rear axle: heavy duty kickstand, rear rack, brakes, bike lock, fenders. All connected by bolts. All this was preformed in our car port in the evening hours in the humidity and with mosquitoes buzzing around. Greg LOVED it! When I came into this scene I immediately thought, photo opt! Thus, we now have photos to show off our heavy metal beasts.
There aren't very many females out riding the streets, so my bright pink, "Miss India Gold" is quite a sight. Actually two foreigners using their own steam instead of a driver is quite a sight. It is assumed that we have a driver by everyone. For example when asking directions to an expat function, "Oh, just have your driver call mine. They'll figure it out."
Since fixing his tube, Greg has been to the bike shop to have his tires pumped up and he has assured me that he watched closely and "thinks" he can pump mine up. Ha! On my list of things to do today is taking Miss India Gold and bike pump to the shop for a lesson. The other adjustment she needs is a taller seat. Women's bikes come in "one size fits all." When I went to raise my seat, it was only a few inches long. Sorry, but I'm just slightly longer than the average Indian woman. Wish me luck. Right now my leg can't go straighter than 45 degrees. Not a very pleasant feeling on my knees.
Our next goal, once everything is fitting right, is decking out the bikes in bling. I was very excited to see another bike recently with lights placed on the spokes of both tires. I exclaimed, "I must do this!" (What could be cooler than multicolored lights spinning out from all directions of my bike)? If I'm going to be drawing attention to myself, I might as well go all out!
Probably the most important feature both our bikes came with was the bike bell. My thumb is placed square on it at all times, as letting the world know you exist is key to survival. Bikes are low on the totem of importance on the road. These things are LOUD. Greg also has his Incredibell (his friendly bell) and I will soon be putting the honker I purchased along with Krissy Steele in Salida (I heart Salida) during Ride The Rockies 2009. You can never make too much noise in Mumbai.
Riding in Mumbai has been an adjustment of technique. The most obvious is getting use to riding with the flow of traffic on the left side of the road and making turns into the correct lane. Traffic being what it is, we've learned to get right in there and do what we need to do to get through it. The one-foot-push-off-the-sidewalk to pass all rickshaws and cars works wonders...all the sudden you're at the front and we can go through red lights too. Ha ha ha ha! Take that traffic!! It can be sweet bliss sometimes. I'm just waiting to use the foot-into-the-side of-the-rickshaw-kick. I keep visualizing that one. I think if I kick hard enough it'll scare the crap out of the driver and make him think twice about cutting off Miss India Gold.
Don't worry, we both have helmets.:)

(While taking these pictures, I realized Greg's front gear had "Hero" worked it there. They don't spare anything in India. Only the best, baby)!
Posted by Greg and Twyla at 10:26 PM