Lauren and Dennis got married

In April, Greg and I made the decision to make a three week trip to the US so that I could try to obtain a business visa. Other employment opportunities were not happening and being able to set up a private practice seemed to be the best option for me to bring home some bacon while in Mumbai. Once we made that decision, I told Greg that I wanted to make it during Lauren and Dennis’s wedding in Des Moines, IA. We would be flying into Des Moines anyway since Greg’s car was parked at his parent’s house, so I figured it was meant to be. In this day and age, Facebook is both wonderful and a curse. I found Lauren’s mom’s page and sent her an email. A week later, after not hearing from her, I emailed Lauren’s brother, Adam, and he was on it. (I found out later 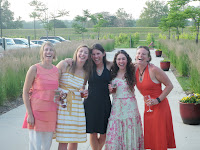 Lauren had set up her mom’s page for her and she really never uses it). The second item on my list was the hotel rooms. Now, maybe I over thought this, but I wanted my bases covered. I was worried if Greg and I made a reservation at the Marriott, where the reception was to be held, Lauren would somehow see that reservation. Plus, it’s more fun to share rooms during these occasions. I thought of Nadine and Nate, but I was worried about telling Nadine. It would be a heavy burden to bear and I knew she would be in contact with Lauren a lot, so back on Facebook, I emailed Nate. He was onboard with the plan. Later we found out he had to remain strong when faced with a questioning Nadine as to why he needed to make the hotel reservation for her friend’s wedding and why they couldn’t share a room with others. He faced her down and the plan was successful.

The curse of Facebook is the Wall. It’s very hard to coordinate showing up at a wedding unannounced and plan other parts of our stateside trip without having people make wall posts. All in confidence were strictly advised no Facebook wall communication. Before we left for Malaysia, Lauren and Dennis were blocked from viewing “friend” posts since Greg’s brother slipped and wrote he couldn’t wait to see us. Plus, Lauren became increasingly interrogating with our last few contacts. “Tell me EXACTALY what you are doing this summer. I want the details.”

We arrived in Iowa at 8:30pm on the 18th of June. The rehearsal dinner was the following evening. We made it through the morning, but had to take a nap in the afternoon to combat jet lag. Getting a little lost on our way to the winery, we got back on track. Just as we were pulling in I was 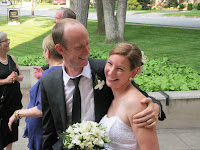 worried the Cavalier would be recognized, so I had Greg park behind a white van. We got out of the car and my heart was beating and I wondered if Lauren had figured it out. We walked up the walk way to the entrance where people were milling about. I saw Nadine and Julia look at us in a weird way and Nate smiled. Julia let out a scream and she, Nadine, and Corrine came running up to us. They were in disbelief and totally surprised. All the sudden I noticed Lauren standing next to us with her mouth open. “What are you doing here?!” I gave her a hug but she remained stunned. We all agreed she finally left her state of shock by the time food was served and she came over to talk with us. Our mission of surprise was a complete success!! MANY thanks to Judy, Adam, and Nate. 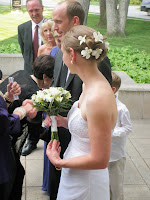 The wedding as the next day, on Father’s day. We pulled through the jet lag, 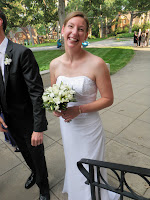 which was becoming painful at times. The ceremony was very nice and the Rabbi’s explanation and humor were wonderful. It was a lot of fun to see and catch up with friends and dance the evening away. Lauren looked stunning and Dennis had a grin on his face most of the night. I’m grateful we were able to attend and support the two of them. Some of Lauren’s parting words, “I don’t know how I’m ever going to top this one.” I told her, “I can’t wait to see what you come up with.”